As Supplier, e-Proteins guarantees the best prices for the highest quality.

Avidin is an egg protein that has many different functions. At first, it was mainly used in in-vitro diagnosis kits, but its use spread to other domains such as cell culture where it helps neutralize biotins and as a result improves the purification process on a chromatography column. Thanks to the improvement of its production process that now allows it to proudly display a 100% purity level, avidin has been at the center of some universities and companies’ interest for several years, in order to develop in-vivo diagnosis methods such as cancerous cell targeting, or even develop drugs. e-Proteins now works on a new avidin derivatives that makes targeting cancerous cells easier by limiting the occurrence of avidin binding with healthy cells. This new derivative plays two roles: not only does it target cancerous cells, it also serves as a carrier for the active components of drugs towards those same cancerous cells. This double function allows  complete coherence and continuity between the diagnosis and the cure.

Avidin shows only 30% homology with streptavidin, however its secondary, tertiary and quaternary structures are identical.

The amino acid sequences of avidin (black) and streptavidin (blue).
Homologous residues/domains in both proteins are shown in bold type. Positively charged residues (Lys, Arg) are underlined. The RYD-containing sequence in streptavidin, which is homologous to that of fibronectin, appears in bold red. The N- and C-terminal sequences clipped by post-secretory processing (via proteolytic cleavage) on streptavidin are shown in purple. The position of the sugar residue, linked to Asn-17 of avidin in the typical NXT(S) type carbohydrate-containing consensus sequence, is identified by a star (*). Tyr-33 & -43, the nitrated amino acid residue in Nitro-Avidin & -Streptavidin, respectively, is similarly (*) identified. Cys-4 & 83 formed a disulfide bridge in native avidin; natural variant (Ile-34→Thr-34) in ~50% of the molecules. 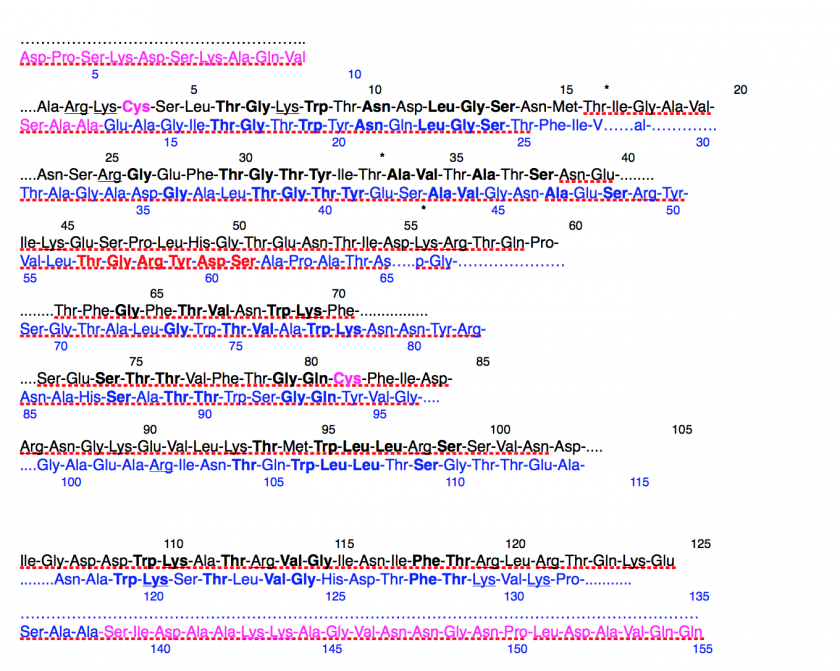 Avidin, a egg protein, binds the water-soluble vitamin biotin (vitamin B7 or H) very tightly – irreversibly – and specifically, with an outstanding dissociation constant of ~10-15 M. The bond formation between biotin and Avidin is very rapid, and once formed, is unaffected by extremes of pH, temperature, organic solvents and other denaturing agents.

The protein, its stability and affinity for biotin, have been extensively investigated and characterized. It folds into a quaternary tetramer structure made of 4 subunits of identical amino acid composition and sequence, each containing 9 lysine residues.

The avidin-biotin system is used extensively as a mediator in a broad range of biological applications, including isolation, localization, cytochemistry, immunoassay and diagnostics (Wilchek & Bayer, 1990). The alkaline properties and oligosaccharide content of the avidin isolated from egg white – which at least appear to be responsible for some nonspecific interaction at biological levels – had originally given the preference to the use of the bacterial biotin-binding analog, ie Streptavidin. However, the nonspecific absorption properties of avidin have been corrected to the extent that the bioengineered neutral & deglycosylated avidin, ie NeutraLite Avidin, exhibits very low levels of nonspecific absorption to biological materials while at the same time leaving a large number of lysine residues readily available for chemical derivatization & conjugation.
The Wilchek & Bayer Group at the Weizmann Institute are to be credited with the merit & success of developing innovative molecular probing / targeting techniques – sometimes coined “bio-recognition” – using the Avidin-Biotin System (ABS).

The general approach in avidin-biotin technology

The protein was discovered by Esmond Emerson Snell (1914–2003) but not yet isolated. In 1941, in collaboration with Paul Gyorgy a specialist of biotin (Vitamin H) , they confirmed that the isolated egg protein was the cause of biotin deficiency or “egg white injury”.. The researchers at the University of Texas named the protein : avidalbumin representing the concatenation of Avid(= hungry) + albumin.

Few years later, the protein was renamed as avidin representing the concatenation of avid + biotin. 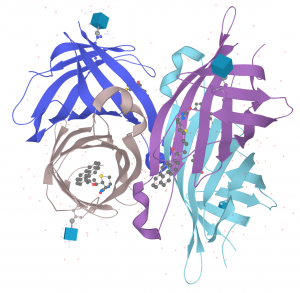 Avidin is a 66-KDa glycoprotein synthesised in the oviduct of a hen and deposited in the albumen of its eggs. Depending of the littérature the molecular weight of avidin can be slightly different.

How many sugars has the avidin ?

Sugar heterogeneity of avidin. The avidin carbohydrate contains at least three distinct oligosaccharide structural types of similar size as shown above; N-linked glycan at Asn-17 consists of GlcNAc(beta1-2)Man(alpha1-3)[GlcNAc(beta1-4)][Man(alpha1-?) Man(alpha1-6)]Man(beta1-4) GlcNAc(beta1-4)GlcNAc. Some terminal galactose may even be present on some glycans. 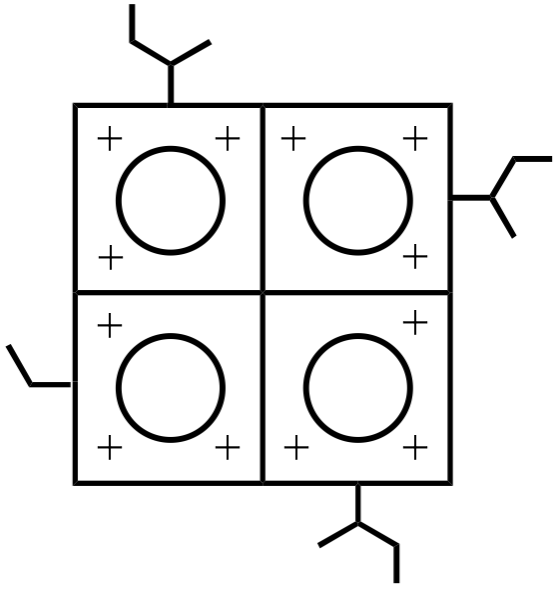 What is the Iso electric point of avidin

A avidin derivative enables to avoid this non specific bonding.

Bioengineering methods have been developed to suppress such nonspecific bindings. The result: NeutraLite Avidin , a nonspecific binding-free form of native avidin, in which the signal/background ratio can be customarily adjusted (see Poly -NeutraLite avidin or Oligomerized neutralite avidin) and the biotin-specific binding can be made reversible (see Nitroavidin, Avidin Monomer, Iminobiotin) to accommodate an ever larger range of applications.

How avidin binds the biotin ?

The biotin-binding site is a deep, pear-shaped pocket, whose volume as well as three-dimensional structure and orientation of the residues participating in hydrogen bonding with the vitamin are predetermined as complementary to that of the incoming vitamin (Livnah et al., 1993; Rosano et al., 1999). In the absence of biotin, the biotin-binding pocket contains five molecules of water that mimic the structure of biotin (vitamin B7) in the binding site until biotin is bound (Rosano et al., 1999).

In the apo-protein (without ligand) the vitamin-binding pocket is fairly open due to the flexible L3,4-loop, thus allowing fast access of biotin to the binding site.

When biotin is bound, it is buried inside the central pocket of the β-barrelstructured protein with the vitamin’s bicyclic ring at the bottom of the cavity. The vitamin is trapped by conformational readjustments of the protein primarily involving the stiffened L3,4-loop, but also L5,6. During the process, three amino acid residues of L3,4 contribute additional interactions with biotin (Rosano et al.,1999). Thus, the high affinity of biotin to avidin stems from an extremely slow dissociation rate (Green, 1963a; Green, 1990).

(Reference Avidin as an Alternative Scaffold S.LEHTONEN UNIVERSITY OF TAMPERE)

How biotin can significantly interfere with lab test ?

This presence of biotin in the specimens can cause significant interference with the lab test or with the diagnostic tests using the biotin technology.

FDA is investigating with all stakeholders for understanding the interference of the biotin in the specimens with the test lab or diagnostics tests using the biotin technology.

What is the avidin process purification ? 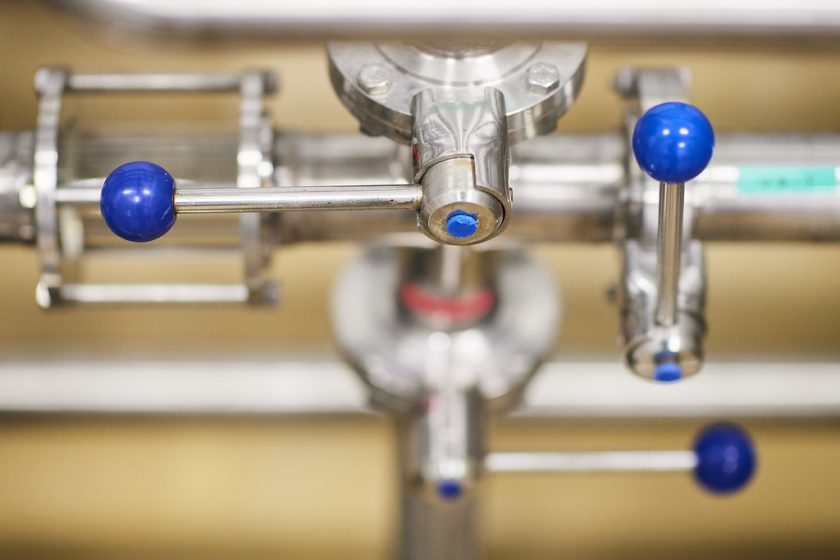 At e-Proteins, the purification process is based on a proven technology in use for more than 30 years. It has been developed by Belovo Chemicals (Bastogne, Belgium) in the 90’s, a world wild egg technology leader. In 2012 e-Proteins has launched an R&D project to improve and to optimise this process in order to offer to its customer a highest quality. Today our product presents a >99% of purity and can be produced with a endotoxin free certificate ( batch size 50 gr) .

What is the avidin market ?

Avidin is used in diagnostic kits , Cell culture for blocking the biotin and in pharmaceutical application. All of those markets have their certification ’s requirements and their quality’s requirements. e-Proteins is able to reach all of those certifications including the virus inactivation when required.