Avidin for switching off anticoagulant drugs

Since heparine discovery, over a century ago, many efforts have been made to improve anticoagulant drugs useful in a broad range of pathological situations such as atrial fibrillation, thrombosis, coronary artery disease, myocardial infarction or pulmonary embolism. Heparine is indeed known to display a reduced bioavailability and a poor pharmacokinetic profile. Besides, bleeding complication risks remain inherent in this therapeutic approach. The recent development of potent reversible anticoagulants with long half-lives offers to patients the comfort of a once-weekly administration with the security of a reversion system (see Petitou et al., 2009 for review). This system is based on the avidin/biotin complex formation; by conjugating a biotine to anticoagulant drugs (ie Idraparinux and EP42675; Figure), activity of resultant compounds (named respectively Idrabiotaparinux and EP217609) can be quenched by a simple avidin injection in case of bleeding or hemorrhage. In this view, in Phase I and Phase III trials, a 100mg avidin infusion was shown to completely and rapidly abrogate Idrabiotaparinux effects in both healthy subjects and patients with deep vein thrombosis (Paty et al., 2010). Remarkably, it was also shown that avidin is well tolerated and its administration does not induce hypersensitivity reactions or clinically significant immunological abnormalities. Hence, this system offers security to patients treated with anticoagulants and, also, opens new avenues for the development of innovative therapeutic strategies based on avidin/biotin complexation. 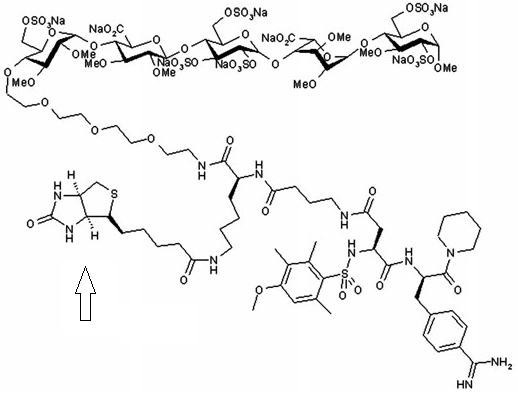