As a societal entity, it’s important that e-Proteins and its employees participate in the improvement of the company. To achieve this goal, e-Proteins dedicates part of its profits to associations/foundations with the goal of improving the quality of life of people or their environment. The employees are encouraged to personally volunteer in local associations.

Respect of the environment is also an important working area of its development strategy. That is expressed in the optimized use of raw materials, ingredients and consumables so that the energy consummation limitations are in agreement with the objectives of COP 21.

For this purpose, it is crucial for e-Proteins to function in a continuous improvement process. Each new idea emanating from its team of collaborators or its industrial partners is analyzed and tested before being implemented to verify a quality equal or superior to avidine; this improvement has a positive impact on both its ecological footprint and the well-being of its employees.

e-Proteins has implemented since 2012 a serie of concrete actions to reduce its ecological impact. Indeed, producing avidin requires a lot of energy, time, and consumables to reach our unique purity and to be a recognised world leader  for the egg binding proteins (avidin) and its derivatives (neutralite avidine , Poly Neutralite avidin).

The first series of projects aimed to reduce the use of electrical energy needed to produce one kilo of avidin. These improvements have been focused on the purchase of new and more efficient equipments (-25%)  but also on improving the operating points (-20%) of the pre-purification process.

A second set of improvements has focused on the choice of new raw material (-20%) and consumable supplies with improved pre-purification efficiencies resulting in less energy for the production of one kilo of avidin. 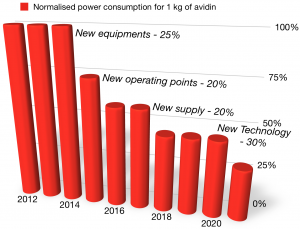 Despite the significant results achieved, e-Proteins has launched on a new and ambitious research program to further reduce energy costs by developing an innovative process  (expected – 30%) for the pre-treatment of the raw material. Indeed this raw material arrives by quantity of 20 tons which are then treated at e-Proteins. This new process aims to pre-treat the raw material at our supplier site in order to reduce the quantity to be transported and to be treated at e-proteins.

More than the energy saving , this new approach enables to transport only 1 ton rather than 20 tons with a proportional reduction of waste generated on site. This technology is scheduled for testing in 2019 for validation in 2020 and production start-up in 2022.